The town of roses

Karlovo is located in the northern part of Karlovska kotlovina (valley), which was known in the past as Stryamska or Gyopsa. The town is 56 km away from the district centre Plovdiv and 147 km from the capital city of Bulgaria Sofia. Its average altitude is 380 m. The climate is moderate, mild, with many sunny days and more than the average for the country rainfalls. The snow-cover does not stay long. The valley and its surrounding mountains have diverse flora and fauna. There are perfect conditions for cultivating oil-bearing rose, lavender, spearmint, grapevine, different types of fruit.

The earliest signs of life in the region of Karlovo date from the Stone Age. Remains of road equipment and fortresses, coins and household items prove that Thracians and Romans inhabited this land. In the Middle Ages there were a couple of settlements near Karlovo which later formed the town. Karlovo exists at this location since ХV century, being a feudal possession of Karla Ali bey. The Turks settled down in the old settlement Sushitsa and the Bulgarian inhabitants were forced to move to the south of Kurshum mosque (built in 1485). The name Karlovo was used later and it probably originates from the name of Karla Ali bey. 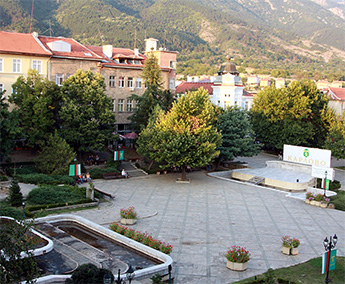 The town reached the peak of its economical and cultural progress during the Bulgarian National Revival period. There were 25 water-mills, a bazaar with about 450 workshops, big trading centres (“maazi”), 18 inns, fountains, bridges in Karlovo. Many crafts evolved, especially the woolen braids production. The cultivation of oil-bearing rose and the production of rose-oil made the town and the region famous and gave it the romantic name – the Valley of roses.
After the Bulgarian liberation, Karlovo fell in an economical decline, as most of the craft settlements. The development of the town was extremely dynamic after World War II, when it turned into an important industrial, agricultural, military, cultural and tourist town in Bulgaria.

Karlovo has contributed to the development of all areas of public life, arts and science. It was a home town of Dr Ivan Bogorov – a publisher of the first Bulgarian newspaper, Ivan Popov – a founder of the Bulgarian theatre, Pesho Radoev – founder of the ballet dancing in the country, distinguished actors like Vasil Kirkov and Elena Snezhina, Professor Ivan Lazarov – sculptor, Hristo Prodanov – alpinist.

Karlovo attracts a lot of tourists with its beautiful administrative and shopping centre, which is formed around the “20 July” square as a pedestrian area, with its park and the waterfall “Suchurum” in the foot of the mountain, with historic and architectural sights, with untouched nature and the huts in Stara Planina Mountains and Sredna Gora Mountains.

Remarkable and generous contributors, such as Evlogi and Hristo Georgievi brothers, were born in Karlovo.
In the beginning of the third millennium Karlovo is a contemporary town, combining modernization with valuable cultural and historical heritage and traditions, with unique natural phenomena. The population of the town has increased dramatically. Nowadays about 30 thousand people live there.