Memorials of the Apostle

The presence of Vasil Levski in Karlovo can be perceived not only in his house of birth but in many other houses, churches, inns, fountains and streets in the old town, which keep the memory of the Apostle. Some of them are very well preserved nowadays, while others only remind of Levski and his deed.

At this church in 1859 Vasil Ivanov Kunchev was ordained hierodeacon by the bishop of Plovdiv Paisii and sang in the gospel choir. In 1997 was done a wall painting by Dechko Todorov on the northern facade of the church, depicting the ordination.

Wall painting of the “Holy Mother of God” church

the mother of the Apostle, in the yard of “Saint Nikola” church. 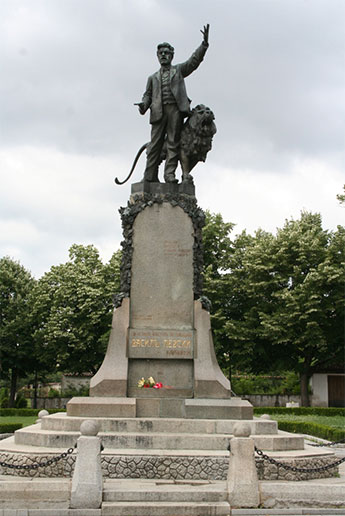 Its author is the Bulgarian sculptor Marin Vasilev. It was done between 1903 and 1907.

There are memorials at the places where were located Karaivanov’s inn, the house of Levski’s sister – Yana, the house of Ivan Grozev, in the area called “Mlati Shumka”, where the Apostle founded the revolutionary committee in Karlovo, on “Vasil Karaivanov” street (former Altun Chair area), where in 1864 Levski cut off his hair and took off his deacon clothes to devote his life to the revolutionary work.

Most detailed research of these places in Karlovo was done by Stoyan Kichev. He described also places, which no longer exist. The research is kept in Vasil Levski Museum.

This impressive and luxurious house of the distinguished teacher and educator from Karlovo is closely connected with Vasil Levski’s youth and with the revolutionary period of his life. As a child, Vasil Kunchev was taught Church-Slavonic language and singing by Rayno Popovich. After his meeting with doctor Kiro Popov (a brother in law of Rayno Popovich and a member of the committee) in that house, the Apostle of freedom went on his last journey across the Balkan, Troyan and Lovech to the village of Kakrina. Levski was a coeval and a friend of Rayno’s son – Teofan Raynov.

Here were carried out the activities of the “Studious group”, founded in 1870. Many of its members were Vasil Levski’s coevals and friends who participate in the revolutionary committee too. There the Apostle founded a temperance society.

A map of the Apostle’s memorials in Karlovo.